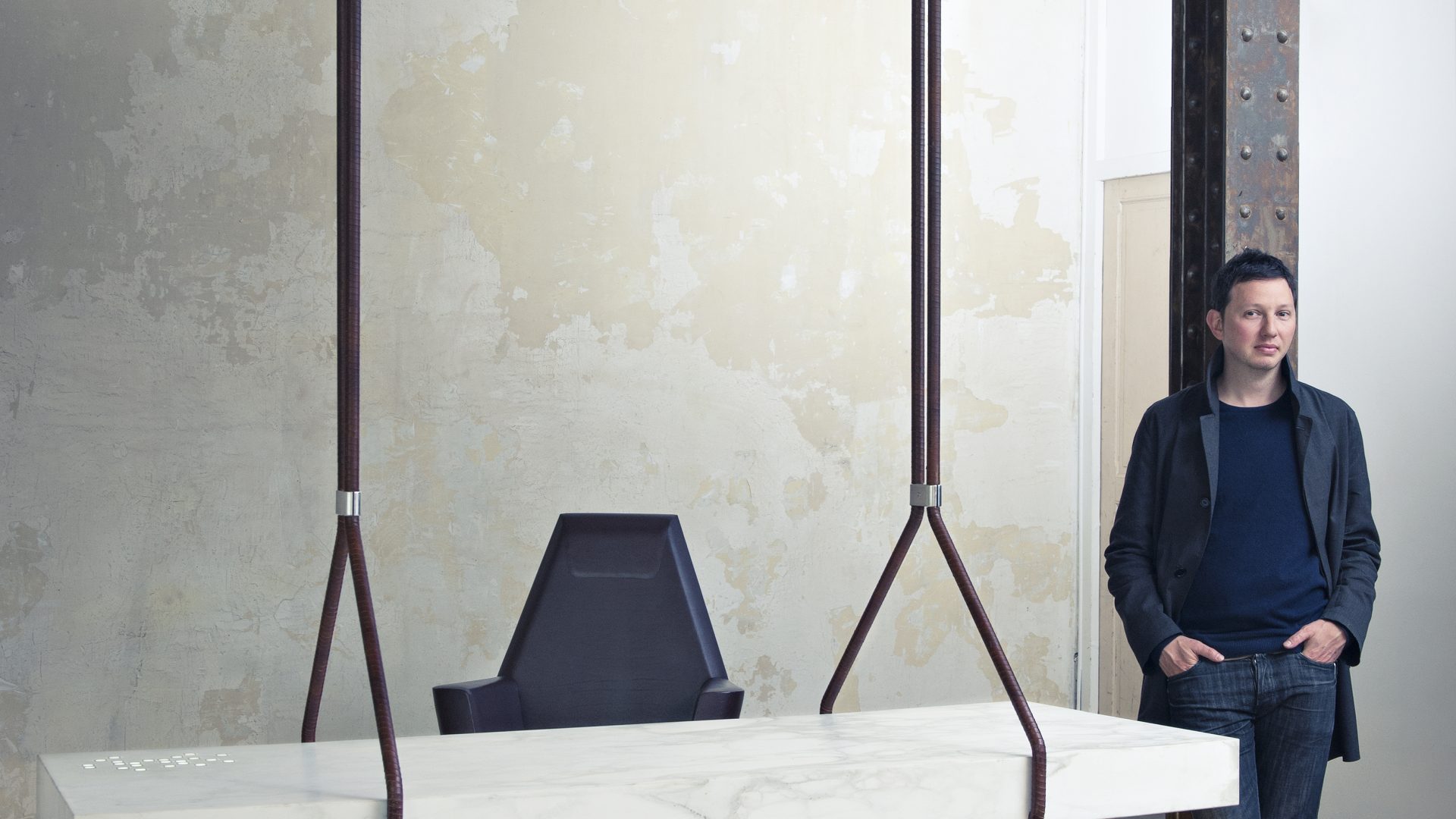 Ramy Fischler, a Belgian designer based in Paris, has developed an eclectic creative practice. He is graduated from the Ecole nationale supérieure de création industrielle ENSCI-Les Ateliers, and laureate of the Académie de France in Rome in 2010. He joined the Villa Médicis where he considered, in situ, how visitors and artists are received within this legendary place, and became interested in the history of furniture and their association with power. Research that gave rise to several exhibits in Italy and Paris. Fascinated by the tension between history, space and furniture, Ramy Fischler created his own agency, RF Studio, in 2011. Among his most recent projects, the Twitter France headquarter, the National Gallery Cafe in London, the community kitchen restaurant Refettorio Paris in collaboration with the artist JR and Encore Heureux architect and the 5-star hotel on the Champs-Elysées Avenue.

He refines his taste for research and innovation as well as explore new territories of design, by managing numerous cultural, gastronomic and conceptual projects through projects of interior design,  creation of furniture, artistic direction and scenography.

Beside his studio, Ramy Fischler has developed an artistic process that echoes the issues addressed in his different projects. This experimental process, often collaborative and transversal, led to the creation of the Heterotopia installation in 2013, presented by AD Intérieurs in collaboration with the writer Jean Baptiste del Amo and Visual Exformation. It consists in a monumental interactive installation created with the director Cyril Teste, the composer Jesper Nordin and the Ircam team. Ramy Fischler regularly collaborates with Fresnoy, National Studio of the Contemporary Arts, the Memorial of Shoah or the Montrouge fair whom he signs the scenography of exhibitions. In 2018, the Bettencourt Schueller Foundation gave him the artistic direction of the exhibit “Pour l’intelligence de la main,” curated by Alain Lardet, as part as the international exhibition “Homo Faber, crafting for a more human futur ” at the Giorgio Cini Foundation in Venice.

Whether designing a new artisanal object, exhibition, industrial product or virtual interface, for Ramy Fischler, the process always provides the opportunity to interfere into a new territory, to observe it, to draw out the subject and its potential, and to establish a collective synergy, the content and character of which are just as important, if not more, than the finished product. In his words, ‘the exchange of ideas, research and experimentation that are fundamental for every innovation, are just as essential for the inspiration and development of creators as they are for the manufacturers or scientists who collaborate increasingly to bring them to fruition.’ The combination of different ideas and areas of knowledge—a permanent feature of his practice—means he can uncover and integrate techniques and issues, which are in perpetual flux.

Aware of the importance of passing down knowledge, he was the Director of Studies at ENSCI-Les Ateliersfor several years, an artist-professor at the Fresnoy-Studio national des arts contemporainsand a guest speaker at the Ecole Camondo, for a master class on innovation and new uses.

In 2016, Ramy Fischler received the Order of Arts and Letters from the Ministry of Culture and Communications, for his work as a foreign designer.

In 2018, Ramy Fischler is named designer of the year of Maison&Objet.